Against intervention in Syria by a friend in Lebanon 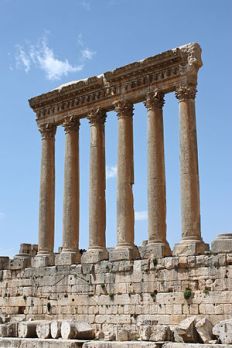 Temple of Jupiter in Baalbek

I visited Lebanon for the first time more than ten years ago. The wounds of the civil war were much more visible to a visitor than they are today. In Beirut, bullet holes of varying sizes and shapes arranged randomly on the exterior of countless buildings told the story of a city that was half-pummeled into the earth during vicious battles. Now Lebanon’s neighbor Syria has fallen to a similar fate. Looking at the situation from Beirut, the hope is that new strikes do not cause Syria to fall even harder and pull Lebanon to its knees in the process.

Most of those bullet-holes in the central parts of Beirut have been cosmetically removed for the sake of promoting tourism but, if you look carefully, you can still see buildings that are covered by them. Decades of instability have been chiseled into the concrete by various factions and militias, each one backed by an external power. Lebanon is the land of proxy war. Its internal politics and conditions are heavily influenced by regional and global trends. The current war in its biggest neighbor, Syria, has not been an exception to the rule. If there is an American military strike, it will not only exacerbate violence in Syria but will also have negative consequences on the health and safety of Lebanon.

While speculation has circled around whether or not a strike will result in a wider regional conflict, there is near certainty that a strike will be harmful in Lebanon. The Syrian humanitarian and refugee crisis will undoubtedly worsen after a military strike. The fallout in Lebanon has been tremendous thus far with tens, if not hundreds, of thousands of Syrians seeking refuge across the border. Lebanon’s infrastructure is ill-equipped for dealing with this human catastrophe. The Palestinian refugee camps and pre-existing informal settlements (shanty towns), which are already the most delicate and impoverished parts of the country, are now housing much of the population that has come across the border from Syria. In the past week, thousands more have already began fleeing Damascus in fear of a new military strike. Unlike in Jordan and Turkey, there are no refugee camps for Syrians in Lebanon because of decisions taken by political factions. Civil society, NGOs, and others have been doing their best to respond to the crisis, but frequently those who do not have the private means for dealing with the conditions suffer the most.

Before any news of a chemical weapons attack in Syria, August was a precarious month for Lebanon that saw an escalation in violence and tension between the main rival factions. In Beirut, a neighborhood controlled by Shia party Hezbollah was hit by a car bomb. The next week, in the northern capital Tripoli, a car bomb ripped through two Sunni mosques on a Friday. The Sunni-Shia rivalry has been defining the political landscape in Lebanon for some time. Tensions are increasing even further as both groups have allies that are fighting on opposite sides in Syria. Most Lebanese Sunni groups back some form of the opposition to the Assad regime and Shia Hezbollah supports its ally the Syrian state and Bashar Assad. In the case of a military strike, people in Lebanon will brace themselves for the possibility of fighting between Shia and Sunni groups that could evolve into an all-out war engulfing the country.

It is certain that Lebanon’s political situation will further destabilize as a result of strikes on Syria. The only question is how much it will destabilize. Will car bombings periodically occur or will all-out war flood the streets again, as it did during the brutal Lebanese civil war?

Speaking recently on the possibility of striking Syria, Susan Rice has said that the current administration does not “assess that limited military strikes will unleash a spiral of unintended escalatory reactions in the region.” In a region that’s been plagued by war for decades, this “assessment” is at best a crap-shot, but no one on this side of the Mediterranean is surprised to see politicians gambling with the lives of millions of people. Decades of unending foreign interference and the consequences of violence have hardened people’s hearts when it comes to understanding day-to-day harshness. In spite of these circumstances, optimists continue to exist and opt for the long-term perspective. Bullet-riddled buildings are made of concrete and with time they crumble. Eventually they become ruins–like the Roman temples in Baalbek today–and will mark a period among many in a long history.

American voices against war in Syria are being heard in the mainstream and people in Lebanon and elsewhere have not given up hope that there will not be military action. The recent Russian proposal to disarm Syria of its chemical weapons has been met with some acceptance in both Washington and Damascus. This diplomatic maneuver should viewed with critical eyes, but at the moment this surprise move augurs well for those who want to generate momentum against military intervention in Syria.

Zayd Sifri is a WRL supporter based in Beirut, Lebanon. In New York City, he has been involved in the Occupy Wall Street Global Justice Working Group, Turath: Arab Students Organization at Columbia University and Students for Justice in Palestine.